This Legenadary Bill Pickett t-shirt is to honor the man who invented bulldogging and one of the greatest legends of cowboydom. Comes in most sizes.

Pickett was born in the Jenks-Branch community of Williamson County, Texas in 1870.[3] (Jenks Branch, also known as the Miller Community, is in western Williamson County, five miles southeast of Liberty Hill, and near the Travis County line.[4]) He was the second of 13 children born to Thomas Jefferson Pickett, a former slave, and Mary “Janie” Gilbert. Pickett had four brothers and eight sisters. The family’s ancestry was African-American and Cherokee.[5] By 1888, the family had moved to Taylor, Texas.[3] In 1890, Pickett married Maggie Turner, a former slave and daughter of a white southern plantation owner. The couple had nine children.[6]

Pickett left school in the 5th grade to become a ranch hand; he soon began to ride horses and watch the longhorn steers of his native Texas. He invented the technique of bulldogging, the skill of grabbing cattle by the horns and wrestling them to the ground. It was known among cattlemen that, with the help of a trained bulldog, a stray steer could be caught. Bill Pickett had seen this happen on many occasions. He also thought that if a bulldog could do this feat, so could he. Pickett practiced his stunt by riding hard, springing from his horse, and wrestling the steer to the ground. Pickett’s method for bulldogging was biting a cow on the lip and then falling backwards. He also helped cowboys with bulldogging.[6] This method eventually lost popularity as the sport morphed into the steer wrestling that is practiced in rodeos.[7][8]

Pickett soon became known for his tricks and stunts at local country fairs. With his four brothers, he established The Pickett Brothers Bronco Busters and Rough Riders Association. The name Bill Pickett soon became synonymous with successful rodeos. He did his bulldogging act, traveling about in Texas, Arizona, Wyoming, and Oklahoma.[5][9]

In 1905, Pickett joined the 101 Ranch Wild West Show that featured the likes of Buffalo Bill, Will Rogers, Tom Mix, Bee Ho Gray, and Zach and Lucille Mulhall; he performed under the name “The Dusky Demon.”[6] Pickett was soon a popular performer who toured around the world and appeared in early motion pictures, such as a movie created by Richard E. Norman.[10] Pickett’s ethnicity resulted in his not being able to appear at many rodeos, so he often was forced to claim that he was of Comanche heritage in order to perform.[citation needed] In 1921, he appeared in the films The Bull-Dogger and The Crimson Skull.

In 1932, after having retired from Wild West shows, Bill Pickett was kicked in the head by a bronco and died after a multi-day coma.[5][6][9] Bill Pickett has a headstone beside the graves of the Miller brothers at the Cowboy Hill Cemetery.[citation needed] However, he is buried near a 14-foot stone monument to the friendship of Ponca Tribal Chief White Eagle and the Miller Brothers on Monument Hill, also known as the White Eagle Monument to the locals, less than a quarter of a mile to the northeast of Marland, Oklahoma.

In 1971, Pickett was inducted into the Rodeo Hall of Fame of the National Cowboy and Western Heritage Museum.[11] In 1989, Pickett was inducted into the ProRodeo Hall of Fame.[12]The United States Postal Service chose to include Bill Pickett in the Legends of the West commemorative sheet unveiled in December 1993.[13] One month later, the Pickett family informed the Postal Service that the likeness was incorrect. Its source material was a misidentified photograph of Bill Pickett’s brother and fellow cowboy star, Ben Pickett. In October 1994, the USPS released corrected stamps based on the poster for The Bull-Dogger.[14] In They Die by Dawn (2013), Bill Pickett is portrayed by Bokeem Woodbine. In March 2015, the Taylor City Council announced that a street that leads to the rodeo arena will be renamed to honor Bill Pickett.[15] On June 2, 2017 a new statue of Bill Pickett was unveiled in his hometown of Taylor, Texas; it is prominently displayed in front of the McCrory Timmerman building located at the intersection of 2nd and Main Streets.[16] On August 6, 2018, Bill Pickett was inducted into the Jim Thorpe Association’s Oklahoma Sports Hall of Fame. 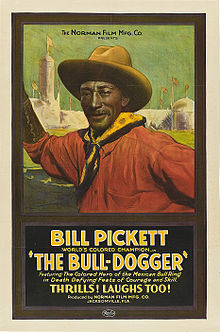